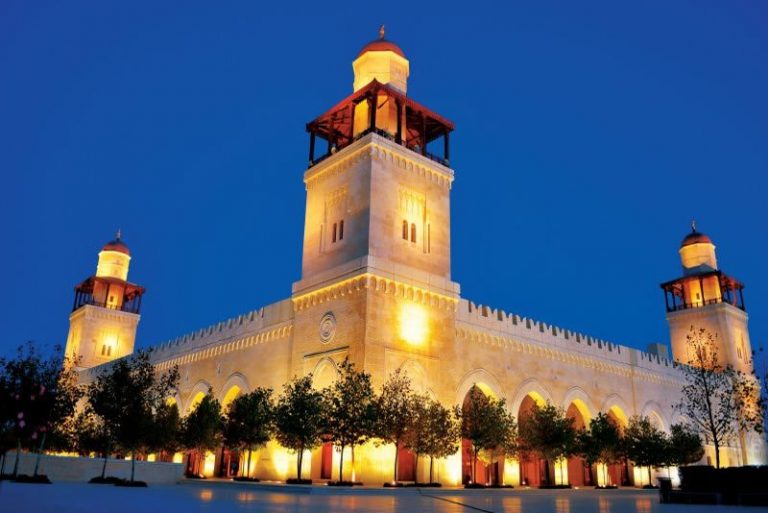 10 Days tour offers you visits to these places on a well-balanced combined journey to make a spiritual pilgrimage for Muslims and trace their faith on this on this earth.

Arrival in Amman for meet and assist for free visa, meeting with your driver at the airport (Queen Alia International Airport) and transfer to the hotel. Overnight in Amman.

After breakfast, Visit to Tomb of journeyman Abd el Rahman ibn Awf Azuhri in Jubaiha near Amman. He was a faithful companion of the Prophet Salvation and Peace, and one of the ten promised to heaven. Then Road to visit Abdullah Mosque in Amman inside the mosque museum, there are 3D models of each place of religious or historical interest. It represents a good starting point for your spiritual stay and the organization of your Islamic tour on the history of the prophets and the companions in Jordan. Then You take the direction to the Cave of “Kahf Ahl el Kahf”. The cave where the young pious mentioned in the Surat “the cave” would have stayed for 309 lunar years in the company of their dog. There are 7 tombs in the cave, it is said that they were buried there. Several characteristics of the cave correspond to the Quranic story which was made on this place and Allah is the most learned. Return to your hotel for the overnight.

After breakfast, Road to Al Kerak to visit the tombs of the Prophet’s companions for the famous battle of Mu’tat in Jordan, Mausoleum of the Prophet’s cousin peace be upon him Ja’far ibn Abu Taleb in the village of Al Mazar. Ja’far fell as a martyr in a battle that took place in the Prophet’s time against the Byzantine Empire in 8 CE. The famous Battle of Mu’tat in which other comrades also died such as Zayd Ibn el Hareth and Abdullah ibn Rawahat may Allah be pleased with them. They are buried at the battle site, which is 1km from the village of Al Mazar near Kerak.
A few kilometers from Kerak in the village of Tafilah, the mausoleum of the companion El Haretha Ibn ‘Umeyr may Allah be pleased with him. He is the cause of the battle of Mu’tat. Indeed, the prophet sent El Haretha as an emissary to the Byzantine emperor to invite him to Islam. He beheaded the emissary of the messenger of Allah without scruples. The prophet is so upset by this act that he sends men under the command of Khalid ibn Walid. The Muslims emerged victorious from this battle. At the End of this day You reach the direction of Petra on the king’s way, overnight at Petra Hotel.

Day 04: visit the Raquim site of Petra (overnight in Petra)

Breakfast at the hotel. Visit the unique “Red Rose” city of Petra, built by the Nabataean Arabs who carved their monumental tombs, palaces, temples and sandstone treasure of the desert rock in its natural shades of pink and gold. You will start the journey on horseback for 700m until the entrance to the impressive narrow gorge (Siq), leads wonderfully to the magical moment, where you can see the Treasure, continue until the street of the facades, the royal tombs, Cardo, temples, Churches, museums. Transfer back to your Hotel for the overnight.

Breakfast at the hotel. Transfer to Allenby Bridge for departure formality then cross to the Israeli checkpoint for formality, you meet your Palestinian driver, continue towards Jericho, the oldest continuously inhabited city in the world, to visit Hisham Palace with his beautiful frescoes from the Umayyad era of Caliph Hicham Ben Abdel Malek, then drive to Jerusalem for the overnight.

Breakfast at the hotel then direction to Jaffa, a beautiful city on the Mediterranean Sea to see the old port, the clock tower and the Hasan Bek mosque. Transfer to the Mount of Olives in Jerusalem. Visit the Salman Alfarisi and Rabaa Aladawiyya mosques. Go to the hotel. The hotel is within walking distance of Al-Haram Alsharif (Al-Alqsa Mosque) where our Prophet Mohammad (pbuh) ended his overnight trip. check in at the hotel for the overnight.

Day 07: visit of the old city of Jerusalem (overnight in Jerusalem)

After morning prayers and breakfast at the hotel, you will head to the old city to see: the walls of the old city of Jerusalem, the bazaar, the Burak wall, the Christian and Arminian quarters and the Alqsa mosque. Return to your Jerusalem hotel for the overnight.

After morning prayers and breakfast at the hotel, the group will head to Hebron (Al-khalil) to visit the Ibrahimi mosque and see: the graves of sayyidna Ibrahim, and his wife Sara, sayyidna Ishak, and of his wife Rifka, sayyidna Yakub, Laika and sayyidna Yusuf (as). Head to Halhul to visit the sayyidna Yunus maqam (pbuh).
Head to Bethlehem to visit the Church of the Nativity, the birthplace of Issa (pbuh). Overnight in Bethlehem.

After breakfast, departure from the hotel. Head to Nabi Musa for praying. Then return to Jordan by the Allenby bridge for the formality. Meet your Jordanian driver then road to the Dead Sea for free time on the beach with lunch, floating in the therapeutic waters of the Dead Sea, the lowest point on earth. At the end of the day, return to Amman for the overnight.

After breakfast, drive to Queen Alia airport for departure.