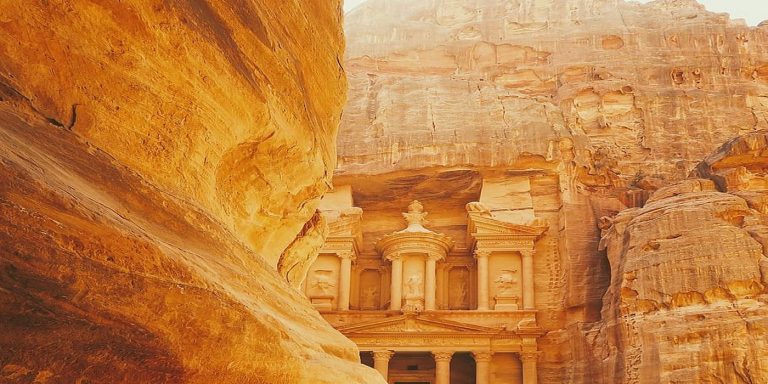 Arrival, Meet and Assist customs formalities, then transfer to hotel for overnight in private rooms.

Breakfast at hotel. Then drive for a city tour visiting: Roman theatre, Citadel, Al-Hussein mosque in the dawn Town of Amman. After that proceed to Dead Sea near the Jordan River, the lowest point on Earth 409 meters below sea level, It is also one of the world’s saltiest bodies of water, with 33.7% salinity (You cannot sink, you will float). The Dead Sea area has become a major Centre for health research and treatment for several reasons, free time at Leisure for swimming at the Dead Sea. Relaxing, mud bath, and Spa are available (Optional). Drive to the hotel for overnight in Amman.

Breakfast at hotel. Full day tour visiting Jarash a city of the Decapolis the ONLY best-preserved city of the Roman times outside Italy; include the theaters, temples, and colonnaded street. Drive to visit Um Qais , then proceed to Ajloun visiting Al –Rabad Castle, the 12th century Castle built by one of Salahdin’s lieutenants in the campaign against the Crusaders. Then go back to Amman and transfer to the hotel for Overnight.

Breakfast at hotel. Drive to Madaba; “The City of Mosaics” visiting the contemporary Greek Orthodox church of St. George the wonderfully vivid 6th- century Byzantine mosaic map showing the entire region from Jordan and Palestine in the north to Egypt in the south, then visiting Mt. Nebo where Moses have gone to get a view of the Promised Land before he died and from a platform in front of the church one can enjoy a breathtaking view Across the Jordan Valley, continue Driving to Wadi Mujib, then come upon Kerak to have lunch at Kings castle Restaurant and to visit the Crusader Castle. After that proceed to Petra, arriving the hotel for check in, dinner and over night at Petra.

Breakfast at hotel. Full day tour visiting Petra; the home of the Nabateans. The complete city carved in a Mountain with the huge colorful rocks mostly pink that called the red-rose city and the entrance to the ancient City is through a 1.25 km narrow gorge in the mountain called the Siq. Before you reach the siq, visitors will Experience and enjoy a short horse ride for 700 m. In the city are various structures, all (except 2) are carved Into rock, including al Khazneh – known as the Treasury – which has been designated as one of the “New Seven Wonders of the World”. Then drive through the KINGS WAY to Wadi Rum for overnight.

Breakfast at the camp after that Proceed for the jeep tour for 02 hours in Wadi Rum desert. Visiting: Bburrah canyon via Alameleh, khor um ishrin, Lawrence house, Siq Lawrence, then drive to Aqaba for overnight.

After breakfast transfer to the airport in Amman in time to board the flight back to home .