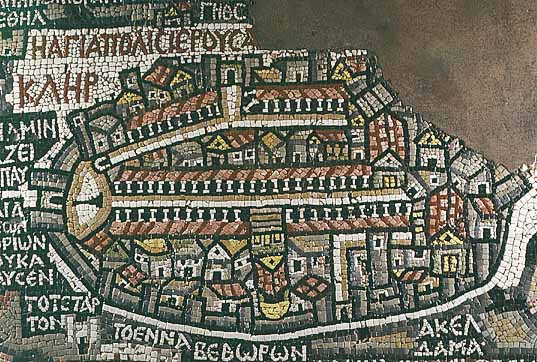 Some thirty kilometers south of Amman, Madaba is a must for any tourist visiting Jordan. Little is known about the history of the town, except that it was part of the territory of Moab, and that the Moabites, Ammonites and Hebrews of the Kingdom of Judea vied to control it. In the early 1880s, the Ottoman government allowed some two thousand Christians living in Kerak to settle in Madaba. They had permission to build churches, provided these were constructed on the sites of the old churches of the Byzantine Era. And this is how Jordan’s most famous mosaic was discovered. The Madaba Mosaic is also unique for its theme, in that it illustrated a map of ancient Palestine. It originally occupied an area of 190m2 and consisted of two million pieces of coloured tesserae.

Although man had the barbarity to destroy most of the original work, which dates back to the second half of the 6th century, the town is still worth visiting to see what is left of the mosaic.