The Kingdom Of History 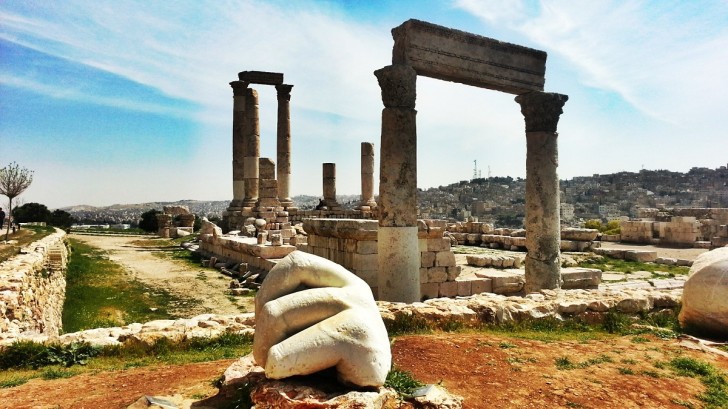 8 Days Between sky and earth, in the waters of the seas, as well as in the beds of rivers, hides an enigma and history. From the Greeks in the north as well as their Roman emperor successors, from the Nabataean sculptors to the conquering Umayyad’s, Jordan the size invites you to feel its warmth. This Tour 08 days 07 nights to visit the kingdom rich in history, Jordan is a crossroads of civilizations growing on its land, a rich destination that deserves

After breakfast, Visit Umm Qays, known by his scholars and philosophers in the 1st century. The old city, still under the sands, shelters an astonishing theater in black basalt (western theater); the remains of a Byzantine church, adjoining a courtyard dotted with sarcophagi cut and carved from the same black stone; a well-preserved underground mausoleum (300 m west of the nymphaeum). An important city to which a monumental door gave access, Gadara also had a large public fountain, a documents maximus with colonnades, a forum where you can see the remains of shops and a racetrack.
Continuation Jerash or Gérasa This is the second major site in Jordan after Petra. Today considered one of the best-preserved Roman provincial cities in the Near East. The peak of Gerasa dates from the 2nd and 3rd centuries.
Jerash is the very example of Roman municipal planning, vast and formal, throughout the Middle East. It is adorned with cobbled, colonnaded streets, immense temples on the crests of the hills, delightful theaters, spacious public squares, thermal baths, fountains and walls pierced by towers and grids.
Return to Amman for dinner and overnight at the hotel.

Breakfast at the Hotel, Visit to Madaba. The city of mosaic, Madaba had 14 churches housed an extraordinary school of mosaic. Their art reached its peak in the 5th and 6th centuries. You will visit the “map of Palestine” unearthed in 1898 during the construction of the Church at St. George Church in Madaba. This barely altered mid-sixth century mosaic traces the geography of the Byzantine Near East. It initially measured 25 m by 5 m and was made up of two million tesserae.
Then you will visit Mt. Nebo, 10 km north-west of Madaba. from Moses, Mount Nebo rises to 840 m above sea level.
It became a place of Universal pilgrimage from the beginning of the Christian period.
Then drive to Petra, we will follow the Kings way which follows the former presumed route of the Hebrews led by Moses during the Exodus, a route of about 200 km, with a remarkable view of the Jordan Valley and the Dead Sea. Stop in the Mujib valley.
Continuation towards Kerak passing by the road of the Kings, Panoramic stop in the valley of Al-Mujib which resembles the big canyon in the United States. Arrival in Kerak (possibility to eat in Kerak), after the meal, Visit of the Castle considered impregnable.
Continue South to the Pink city of Petra. Evening arrival at Petra Installation at the Hotel for Dinner and overnight.

Breakfast at the Hotel and departure for a full day tour of Petra the Pink city “Petra”, “the stone” in Greek, stems from the Aramaic toponym “RQM” (pronounced “rekem” or “rakmou”), which means “bicolour “. Geology is indeed at the origin of the red city, entirely carved in soft Sandstone.
You will cross the Siq, a narrow and long fault due to a prehistoric earthquake. Suddenly, at the end of the Siq, appears the most majestic monument of Petra, “Al Khazneh” or the “Treasure” with Greco-Roman decor.
There are hundreds of carved buildings, temples, Royal tombs, houses, burial chambers, function rooms, baths, monumental staircases, arch-shaped doors, cobbled streets and above all the theater Roman of about 3000 seats. You will cross the Roman cardo and you will Visit Qasr El Bint, the only temple still standing and in a good state of preservation. Possible Lunch at the restaurant on site. In the afternoon, ascent to Mount El Deir or the Monastery (optional), and free time.
Return to the Hotel. Dinner & overnight.

Breakfast at the hotel and departure, towards the small Petra “Little Petra”, then road towards Wadi Rum – The desert of Wadi Rum- If Petra is the result of the work of man combined with that of nature, cliffs, peaks and valleys of Wadi Rum owe their “serene beauty” and their “overwhelming grandeur” to themselves. This desolate site was indeed one of the high places of the Great Arab Revolt, magnified by director David Lean in one of the most impressive scenes in his Lawrence of Arabia.
Tour in a “local” Jeep pick-up in the desert for about two hours. Then Dinner and overnight in a Bedouin camp Under the tent.

After breakfast, Road to Aqaba, Free time in the city of Aqaba to enjoy a relaxing time and several activities are offered, Aqaba is the perfect opportunity to relax after the Pink desert, heading north. Its sandy beaches and coral reefs are the most authentic in the Red Sea and the Jordanians are working diligently to preserve them. Dinner and overnight at the hotel in Aqaba.
Option : Snorkeling among the multicolored corals and fishes of the Red Sea from a diving center, For those who wish, scuba diving in the midst of some of the best preserved coral reefs in the world.

Breakfast. Departure to the Dead Sea on a beautiful Wadi Araba Road which penetrates the desert of soft and colored Sand then mountains with beautiful canyons and to follow the Dead Sea from South to north.
Then drive to the Dead Sea for a swim and unforgettable experience on a private beach. The length is 75 km and 15 km wide, the Dead Sea covers an area of 920 km2, almost twice that of Lake Geneva. The maximum depth of the Dead Sea is 399 m. The lower level of the Jordan depression is therefore 410 m below the level of the free seas and as such it represents the lowest point on the globe.
Return to Amman. Dinner & overnight at the hotel.

After breakfast, transfer to the airport for departure and fightback.